From Latin malus (bad, wrong, evil) and Greek zôion (animal) with the suffix -an (adhering to or following).

Literally, “a person who is harmful to animals”.

Malzoism: the philosophy and worldview thereof.

Background of a new term:

In 2011, Dr. Melanie Joy introduced the word “carnism” in her book, “Why We Love Dogs, Eat Pigs, and Wear Cows: An Introduction to Carnism”. In this fantastic work, she examines the belief system that allows most people to turn a blind eye towards the source of their meat-centric meals, while paradoxically showering affection upon other animals. She defines carnism as “the dominant, yet invisible paradigm in modern culture supporting the choice to consume meat”.

While this is a perfectly suitable term when discussing the human psychology of consuming animals and their products, (and it has become a quite popular in the vegan community to refer to meat-eaters as carnists), “carnism” falls far short of actually defining a more general anti-animal belief system: one that accepts the exploitation of animals for any reason, not just as food.

The term “vegan” was coined in 1944 by Donald Watson when he founded the Vegan Society. The modern definition of veganism is:

“A philosophy and way of living which seeks to exclude—as far as is possible and practicable—all forms of exploitation of, and cruelty to, animals for food, clothing or any other purpose; and by extension, promotes the development and use of animal-free alternatives for the benefit of humans, animals and the environment. In dietary terms it denotes the practice of dispensing with all products derived wholly or partly from animals.”

The term “carnism” certainly addresses one of the most obvious and common forms of animal exploitation around us. However, it really is not a true antonym of “veganism”. It only refers to eating animals or animal-derived products. For that reason, I have introduced a new term: “malzoism”. Like “veganism”, “malzoism” also refers to all animal exploitation, not just consumption as food:

“A malzoan is a person who condones, promotes, or actively engages in non-human animal exploitation, subjugation, reproductive abuse, torture, murder, consumption, or commodification. The philosophy and worldview that is accepting of this behavior is known as malzoism.”

Malzoism is therefore the opposite of veganism.

A malzoan is anyone who is not a vegan.

Venn Diagram of Veganism vs Malzoism. Notice the lack of any overlap. 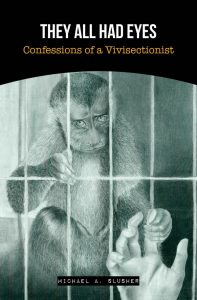 “Riveting reading. A true insider’s view into a closed and chilling world.”
– Ingrid Newkirk, President and founder, People for the Ethical Treatment of Animals (PETA)

Get a SIGNED COPY of this important tell-all from the former vivisectionist who coined the term “malzoism”. Proceeds support this site.

Details at Amazon or Buy Now below for a signed copy. 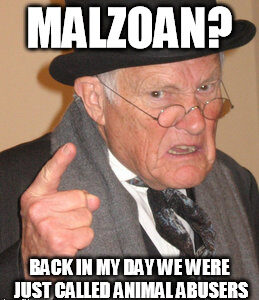 Animals Slaughtered Since Opening This Page:

by shopping at Amazon.com through this link.